“With these three players, we believe we have a group capable of leading in many different ways,” said Hamilton Bulldogs Head Coach Sylvain Lefebvre.  “Martin St. Pierre is an experienced player that has been a captain in the past, Greg Pateryn has also been a captain previously and Gabriel Dumont is a player of great character.”

Pateryn, 23, split last season between Hamilton and Montreal. In 39 games with the Bulldogs, the 6’2”, 222-pound defenceman recorded 12 points (seven goals, five assists) and 27 penalty minutes. In three regular season games with the Canadiens, the Sterling Heights, Michigan native recorded no points and no penalty minutes. Before turning pro, Pateryn played 142 regular season National Collegiate Athletic Association games with the University of Michigan Wolverines, recording 43 points (six goals, 37 assists) and 145 penalty minutes. He was originally selected by the Toronto Maple Leafs in the fifth round (128th overall) in the 2008 NHL Entry Draft.

It's an honour & priviledge to being @BulldogsAHL 12th Captain in team history for this upcoming @TheAHL season! Thanks for the support!! 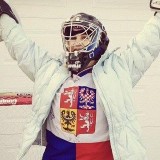